Best Trumpeter of the Festival 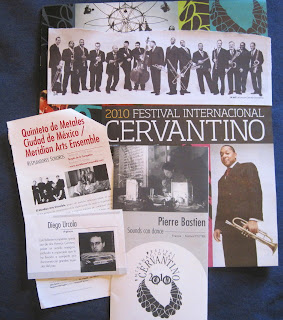 The above collage is a small homage to the greatest trumpeter in the history of this wonderful instrument. Louis Armstrong, was not only the greatest trumpet player ever, he also loved to assemble collages. My collage features a few of the trumpeters who performed at this years Cervantino.
Jazz at Lincoln Center played on the first Friday night of this years festival. Trumpeters Ryan Kisor, Marcus Printup, Kenny Rampton and of course the great Wynton Marsalis. Not a bad way to start. The Lincoln Center cats split their show with Cubano Paquito D'Rivera and his wonderful small group. In Paquito's group was Argentinian trumpeter Diego Urcola. I had never heard of this cat before and before he had played a note I wondered what it would be like to follow some of the greatest trumpeters. From the first notes of his opening solo I knew that Maestro Urcola was not following the greatest trumpeters, he was 1 of them. Oh, he also kills it on the valve trombone.
The 2nd Friday of Cervantino I received a free ticket from a new trumpet player friend, Marc Osteer. Marc is the newest ex-pat trumpet player in Mexico. He is the new principal trumpet for the UNAM 1 of the many orchestras in D.F. (Mexico City). Marc was playing with a brass quintet that combined with 1 of the best brass quintets in the world, the Meridian Arts Ensemble to perform a concert entitled Resplandores Sonoros. The concert featured music of Gabrieli and a few others. It was nice hearing these compositions played in the beautiful Templo de la Compania. The only complaint about this concert was that I didn't think the audience waited long enough after the completion of each tune before they started clapping. As a brass player I like to hear the sounds completely die before interrupting.
A trumpet note: It is hard to tell inside of a structure as grand as the Companina who is playing what, but at the conclusion of the last piece I saw trumpet great Jon Nelson look over at my new friend Marc with a wonderful look that could have only meant that Marc had just nailed it. Nice job Marc. And thanks for the ticket.
The next night I heard the Orquesta de Jazz del Concertgebouw big band from Holland. I can't believe that there were 2 big bands at this years festival. In the word's of Tom Matta, "Big Bands are BACK!"  Jelle Schouten, Wim Both, Rini Swinkels, Ruud Breuls and Jan van Duikeren were the trumpeters. The concert was wonderful. More swingin' world class brass.
While all of the trumpeters mentioned above are some of the very best at what they do, there was 1 trumpet player who came to Cervantino and did things I have never heard of or even thought of attempting during my 25 or so years of buzzing into this metal tube.
Pierre Bastien from France brought over his little creations and showed all that were lucky enough to be in attendance, that just like the title of the show states, Sounds can dance. Pierre is a very creative inventor and like most great inventors he isn't shy about showing anyone his creations. It was very kind of him to open the stage up after the show for all to see.
I'm not a good enough writer to explain well what went on during the show, but I'll try my best to give you some sort of explanation.
Pierre has several tables covered with small devices that he uses to create different sounds. There are many small cameras placed in and around the devices that capture the images of the sounds being made and then the images a projected on a large screen. Once Pierre gets the sounds where he wants them, he picks up his pocket trumpet and improvises along with the sounds. It's not just his improvising that I liked, at different times he played the trumpet through homemade mutes (1 filled with water) and he even played the trumpet with no mouthpiece. This show is a part of Festival MUTEK which is an organisation with some of the coolest cutting edge new music. It was nice to see so many young people at Pierre's show. And it's nice to hear someone doing something completely new and fresh with the trumpet. He totally surprised me and Pierre Bastien gets my award for Best Trumpeter of the Festival. I'm sure he's excited. 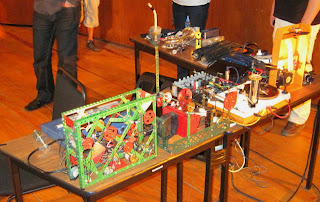 I will try to get video online. Please email me if you want more information on any of the Cervantino events that I have mentioned.

I think that any thing that calls it's self a "Festival" needs to take a good look at how many events in the "Festival" are free. 1 of the best things about Cervantino is that so many events are free. Which makes it perfect for people to experience the art. I love it when you aren't expecting anything and you just walk right into it. This is the way for all people to experience art. No money needed for tickets, no fancy clothing needed to fit in. Artist create art for all people, not just wealthy people.
Posted by Jason at 11:14 AM