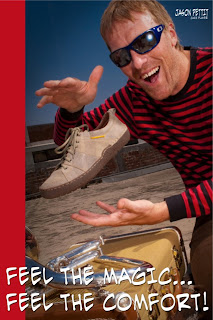 I played a gig at a country club a few months ago and at the end of that gig a man came up telling me in perfect English how much he enjoyed our music. Ricardo and I got to talking and I found out that he was a photographer who lives in Leon. As you may already know, I have been working with local Guanajuato photographer Memo (see post Memo's Fotos August 2010) ever since we moved to Guanajuato in 2005.
However, for BUZZ and my new projects, I wanted a different look.

I met with Ricardo in Leon this past week to begin taking fotos for the BUZZ website and he had the idea of posing me with a shoe. Ricardo teaches English and 1 of his students owns a shoe company. Leon is the Shoe Capital of Mexico, maybe all of North America. Many, many shoes come from Leon, GTO. Ricardo showed the above foto to the owner of the company the same day that we took it. He liked it. It's much easier to be a model when you don't look like anyone else in the country. I'll let you know what, if anything develops.
As soon as I lost my camera I'm getting people who want to take pictures of me. Strange.
Posted by Jason at 12:13 PM