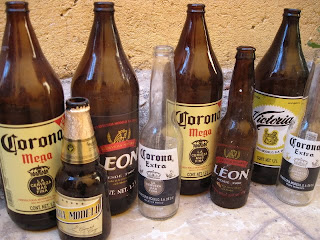 My cousin Matt was one of the first to notice the development of a 5 year pattern in my life. I got married in 1995 and returned from Chicago to Texas. In 2000 I joined the Air Force and moved to Colorado Springs. In the fall of 2004 I auditioned for the OSUG here in Guanajuato, won the job and the whole family moved to Mexico by Jan 2005.

That brings us to 2010(Mexico's Bi-centennial). So far the changes are self inflicted and are directed towards giving me a much healthier, happier life.

A week before Easter I was on a 4 concert tour of GTO(the state of Guanajuato) with the orchestra and during the second concert I had decided it was time to resign my position of Co-Principal trumpet. There are many reasons for my resignation. "If you can't say anything nice, don't say anything at all." Of course this will greatly slow down our construction project but the feelings of joy that I have felt about making this decision let me know that it was the right decision.

At the same time that I had decided to resign I also decided to stop drinking. I had been drinking way way way too much beer. Not only is this practice not healthy, it's very expensive. I'm not really a hard liquor drinker, not saying I haven't had my share of those as well, but I am a beer kinda' guy. I don't think I'm an alcoholic but I'm no doctor. While I may not be an alcoholic I do have the sort of background you would look for if you wanted to hire an alcoholic. "Family history"... Check. "Started drinking at an early age"...Check. Etc.. However, even having said that, I do have the ability to stop whenever I decide. So I have stopped drinking. Not saying that I'll never drink again or that I would refuse a beer if you're buying. I'm just no longer going to buy any beer for myself. I'm putting all of my returnable bottles, big and small, out for anyone to pickup. I do feel better and maybe even maybe a little faster when I'm riding my Karate Monkey (29' single speed mountain bike). 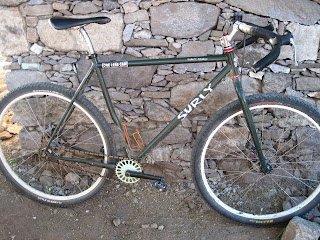 So, it's early in the year. You will have to check back in to see what other unforeseen changes I'm in for.
Posted by Jason at 1:37 PM