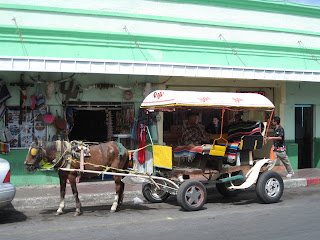 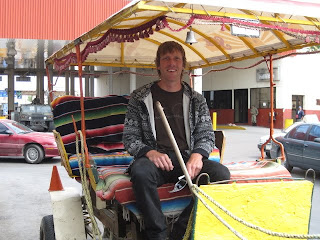 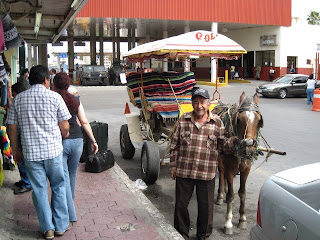 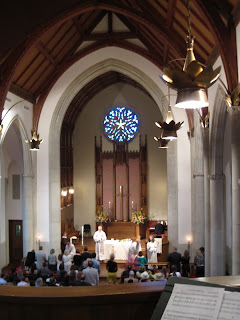 Looking through the fotos that I just downloaded on to my computer, I am reminded that it has been a while since my last post. I'll try to bring you up to speed with the latest developments, as best as I can remember.

For the last 3 years during our Easter vacations I have been returning to where I grew up, Arlington Texas and playing for Easter Sunday services at Highland Park United Methodist Church in Dallas. I always take the bus because that is the cheapest way to travel. Like the previous years, I leave from Leon GTO on a first class ETN bus headed for Nuevo Laredo. The bus leaves at 9pm and arrives in Nuevo Laredo the next morning around 11am'ish. Not the fastest, but comfy. The ETN buses have such large seats that there are only 3 in each row. I am 6'1 and there is almost enough room for me to completely stretch out. Pretty good for sleeping. Took a few fotos of another form of transportation just a minute or so before crossing into another world.

Each time I return to Estados Unidos (the U.S.) it takes some time for me to adjust. So different from my very simple Mexican life. After spending so much time out at the land my life seems to have slowed to a much slower pace than everyone in the U.S. and probably even many people in Mexico.

Most of my family lives in the Dallas, Fort Worth area. Although the DFW area is not one of my favorite places in the States, it does have the majority of people that I care about. My family is super cool. It was great to see as many of them as I could. Also super fun hangin' out with my old friends.

On Easter I played 4 services (8,9,10,11) as solo trumpet with organist Chris Blunt in the Cox Chapel (see foto from where I play in the organ loft) at Highland Park United Methodist Church in Dallas. I have played with Chris for the last 3 years and we always have a blast. When I'm in town for Christmas I send him up a few pieces to choose from and this year we played the first movement from a Purcell Sonata for prelude and Te Deum by Charpentier for postlude. At the beginning of the 8 o'clock service there is always what they call a Hymn Sing. Basically anyone can call out any hymn that they would like to sing and away we go. When I am playing for church services one of the things I love to do is play along with the hymn as everyone sings along. On the last verse I will usually improvise a descant line that works over the hymn. This sort of thing is old school trumpet playing. It is always a wonderful time playing great music with my good friend Chris.

The night before Easter the guy who contracts me in Texas, Sterling Proctor called and asked if I could help out a few trumpeters playing in a brass quintet ending up a long morning at St Thomas Aquinas, a Catholic church a few blocks from where I was playing. I have played at this church every Christmas Eve for the last 4 years. When I arrived and talked to the guys there had been a few changes and they only had 2 pieces for me to play on. The first one was the Easter standard "Jesus Christ Is Risen Today". The second piece had a Spanish title that I can't remember, anyways since I would be performing this piece the first time I had ever seen it I asked Tim a question about tempo and after he told me the tempo he said that we were supposed to play in a Spanish or Mariachi style (lot's of vibrato and very percussive beginnings to each note). I thought he was joking. He was not. One thing I am pretty good at on the trumpet is imitating many different styles. So I laid into the style pretty good and all of the guys got excited. Always nice to be able to bring out or change peoples emotions with your playing. It was a super fun ending to a great day of playing.
Posted by Jason at 10:25 PM