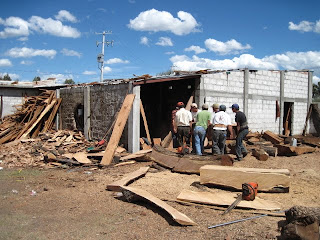 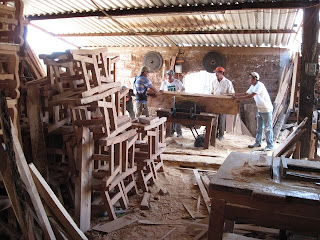 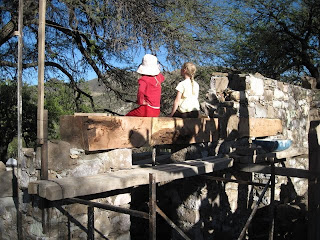 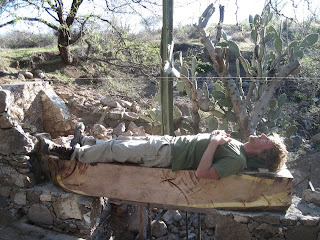 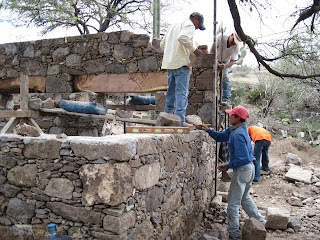 Working again this week out at the land. Our workers were there from Tuesday until Friday again for the 3rd week. So cool to look back at the fotos and see all of the progress. I'm very proud of what we have accomplished.
On Tuesday I headed outside of Dolores Hidalgo to pick up the mesquite beams I ordered last week. When I arrived they still needed a little work and all of the workers were on lunch break. It took 7 guys to move the bigger (210 cm. by 40 cm. by 30 cm.)of the two beams up onto the giant table saw. Very fun watching these expert wood workers work with such a massive piece of wood. Once they were finished and had loaded them in the back of the suburban, I started to wonder how and if I would be able to get these bad boys out of the truck. My guys were waiting when I returned and were undaunted by the task. Have I mentioned how much I love my workers? Then I started wondering "How the hell are we going to get these beams in place above the doors?"
On Wednesday morning I got my answer. Under the direction of Alberto we slowly inched the smaller (160 cm. by 40 cm. by 30 cm.) of the 2 beams into place. I had tears in my eyes as I now could see for the 1st time a doorway. Until now we have only been constructing walls and it was very cool to see a little more of my idea coming to life. The beams have the perfect look for our rustic casita. After returning from rehearsal, we put the bigger of the beams in place. While moving the beams we sometimes used a steal bar under the beam for a little better grasp. For the last big push to get the beam on top of the lower wall one of the workers asked "Con la bara o huevos?" "With the bar or balls?" We opted for the more macho approach and got that big sucker up there.
Posted by Jason at 7:38 PM